INTERVIEW WITH A LION 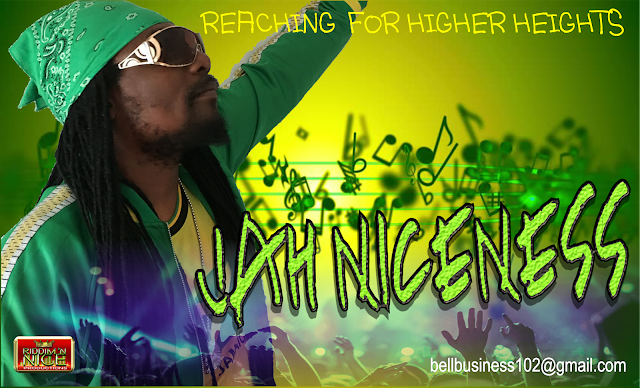 It seems only fitting that we begin 2020's coverage on SHYRICK's talent flowing through this station with the NATION'S MOST DECORATED  and  BELOVED  rootsman: JAH NICENESS. 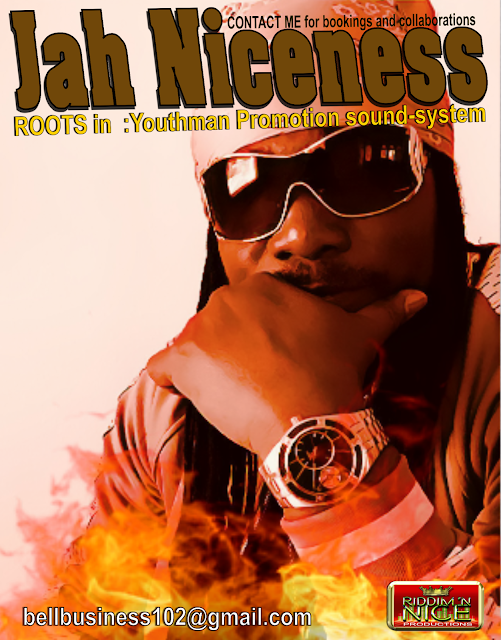 You can often find him adorning not only  our  VIP chat room during live programming but within  the conversations of other radio stations during their programming as well.  Because  he is loyal to the cause, supporting those who strengthen not only him but the entire industry.

Jah Niceness can often be found lending a hand or referring fellow artists to resources they may need to advance their projects, even though there's a high chance that the favor would never be returned. And maybe that's what his fan base see's in his vibe... THEMSELVES ... "STRUGGLING"  searching for  'PEACE"  and fighting to remain  humane . 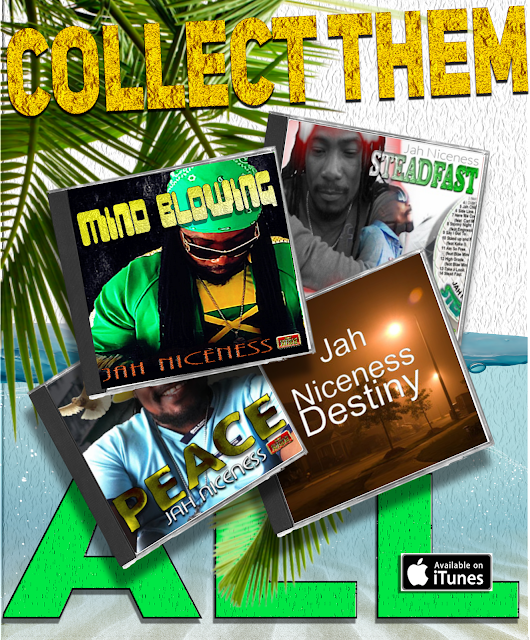 His lyrics are delivered on golden vocals dressed in thick luscious beats which are crafted to be pure art. EAR CANDY as you may call it! Always a pleasure to kick back to.

His roots come from deep within in Sugar Minott's  YOUTHMAN Sound System, and he has continued in his career over the years dropping  massive melodious ROOTS VIBES like cookie crumbs right to his own front door: "RIDDIM AND NICE PRODUCTIONS" where JAH NICENESS produces some sweeeeeet vibes like : 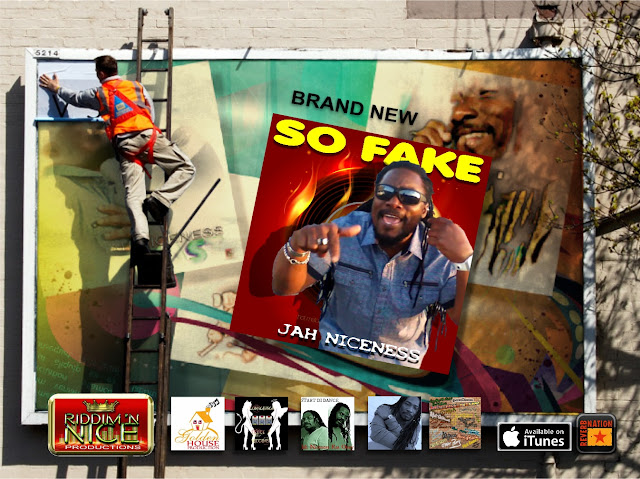 (“While maintaining strong reggae roots, the song is very competitive with the current pop music trend in terms of sound. One can tell that Jah Niceness is looking to capture a broader audience of fans and make them his own. “So Fake” is well produced and it shows the full diversity of Jah Niceness’ abilities.

What ultimately separates him from all other competition is his straight chatter and vocal. He realizes a fusion of the smooth and the rough, of wisdom and raw impulses, to set his lyrics and vocals of joy, exuberance and insight against an infectious Reggae style.

“So Fake” has it all; great melody, impressive vocals, heartfelt lyrics, and a pulsating beat. On the strength of this recording, Jah Niceness is emerging at the forefront of serious contemporary underground reggae artists in the world of popular music today.” Staff Writer - BRANDOOZE) 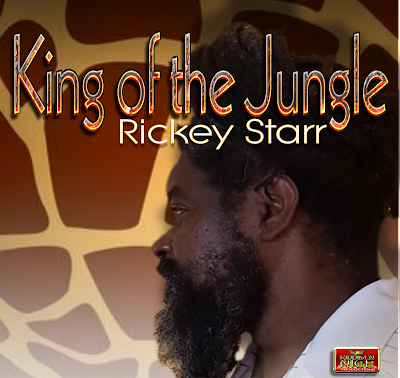 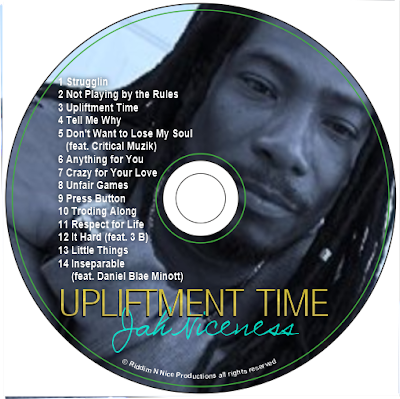 JAH NICENESS has some vicious collaborations as well, one such collaboration dumped SHYRICK NATION upside down and earned a 2019 BEST COLLABORATION win in the Grand Jam .


And we certainly cant forget that memorable track 'HERE WE COME " off of the WRITE DOWN MY NAME RIDDIM  with CARL MEEKS that got massive attention at REGGAEVILLE...

ALMOST AT THE BRINK of busting loose seems to be the relative state of being for this talented artist amid this rolling thunder of turmoil that the  industry and state of networking climate keeps dishing out . 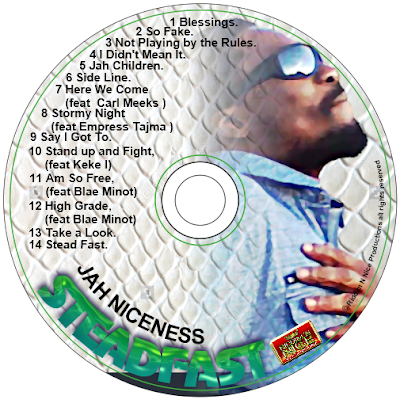 But as the title of this article suggests, JAH NICENESS  is undaunted by the struggle, rather it fuels his creativity and he is determined to continue making impact after impact until the glass ceiling can do nothing but break for him !

We caught up with JAH NICENESS to ask him what his plans are for the brand new year ahead, 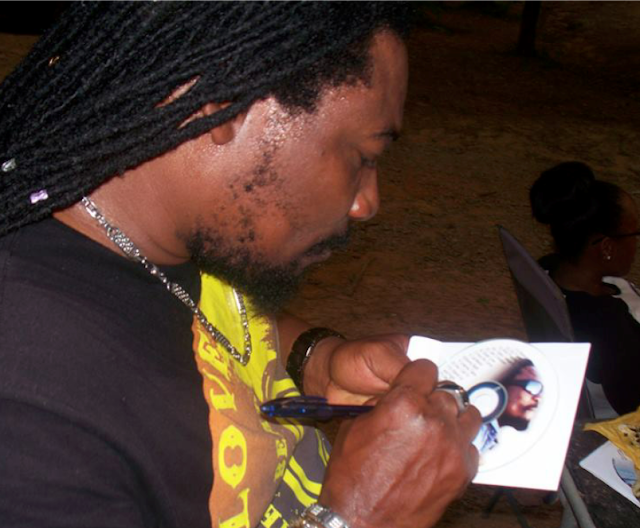 JAH NICENESS has been weaving in and around the so called "popular" social networks for a long time.  And he's come to a few conclusions. First of all, the need to stay flexible and humble is the key to survival.  Flexible enough to know when and where to build communication platforms to search out more potential fans. And humble enough to build from scratch not once , but many times. Because starting from ground zero is a very humbling experience packed with potential rich rewards if you have the work ethic and grit to climb !

He points to the ever changing environment that like a wave has washed out sites as quickly as it rolled them in like: Myspace and  Reverb Nation to name a few . And given the current networking environment within Facebook he questions it's future validity as well. 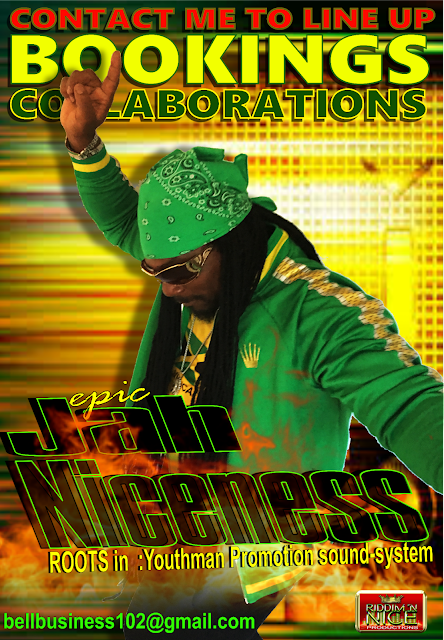 Secondly, JAH NICENESS  points out that on most of the popular social networks advantageous to build a career within (like Facebook, Instagram, Whats App and so on)  you will  always find the same players within the industry communicating there.  JAH NICENESS is looking for fresh waters to fish within, fresh talent to meet and collaborate with and fresh music to bring to his fans !

These are the reasons JAH NICENESS has currently immersed himself within a network on the other side of the hemisphere that doesn't even speak English ... but sure speaks Reggae.... VK.com 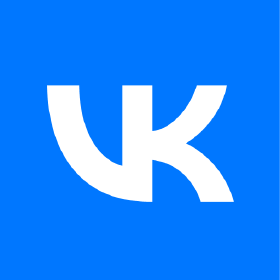 ВКонта́кте, meaning InContact) is a Russian online social media and social networking service based in Saint Petersburg. VK and available in numerous languages with more than 500 million accounts 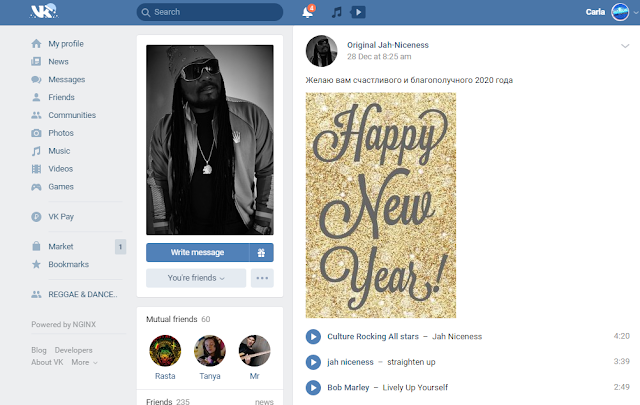 "They sure know their Reggae; " says  JAH NICENESS,  pointing out that he has already made some uplifting and encouraging connections and is looking forward to continued building within this new market .

This isn't the final stop for JAH NICENESS though, he will be searching out even more new platforms to drum up new fans because  "Building links is a process that doesn't ever stop for the indie artist ..." 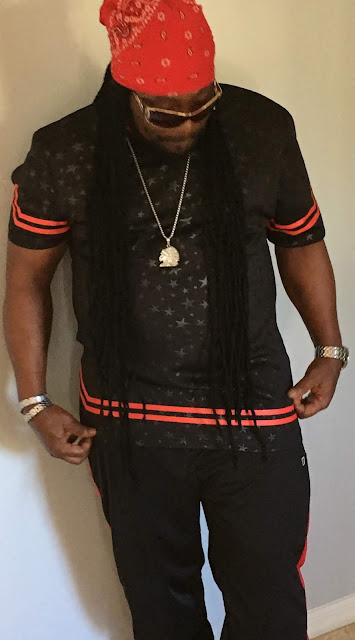 "I have loads of new music in the works and planned for the near future, and I'm going to keep coming with the vibes... I will never stop "

Networking at the unexpected is not the only 2020 strategy for JAH NICENESS, he is reaching out within the community of artists promoters and radio personalities alike looking for compilations to hop onto and collaborations to mash up with because bottom line.... he just loves making good music.

You are encouraged to link up with the artist for collaborations, interviews and bookings.

1) A little slower than expected to make it to the scene is "DI ADDA HALF" which is receiving a polish to the mix right at this moment.

The track will be dropped under the  "RIDDIM N' NICE" label as a smooth cultural 1 drop kinda vibe. I know the NATION is looking forward to it ! 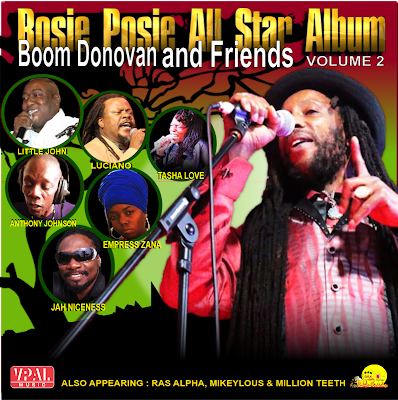 3) And finally awaiting it's finishing touches for debuit is "THANK YOU"  which is promised to be a sweeeeet lover's rock vibe like only JAH NICENESS can throw down.

"I an excited about adding my son to the label in the near future as well."


JAH NICENESS son currently performs under the name of KAMAL. He is a Dancehall Singjay out of Jamaica with a few singles sitting on download... You can check them out on SPOTIFY by following this link :
https://open.spotify.com/artist/5rhTdOFNV1vpzbNM83zrlk

He has a good sound," says JAH NICENESS, "he has a very good ear and is easy to work with."

At the moment JAH NICENESS is building up interest and listeners for his son by talking with promoters and radio personalities and dropping tracks.

The end game is to introduce some RIDDIM N' NICE produced singles featuring KAMAL in the not to distant future to further enhance an already exciting label !

" I want to wish my family, fans and friends the biggest and best year ever..." 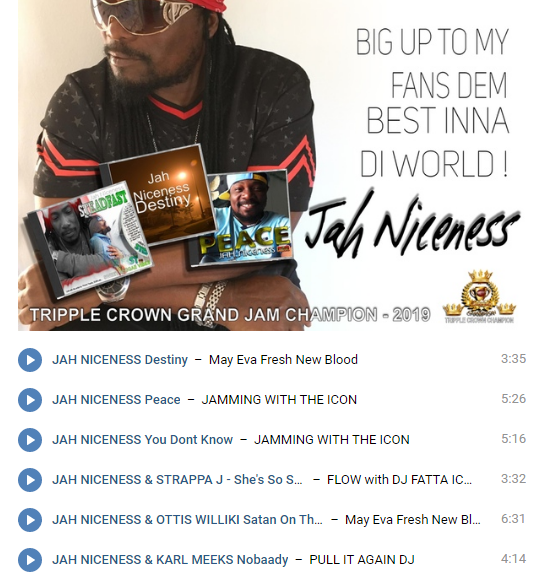