"MY GIRL" - A RIDDIM THAT WONT STAY HIDDEN 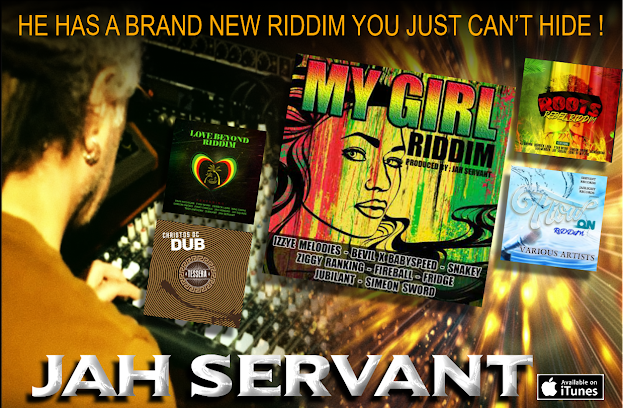 I often joke with DJ FATTA ICON that Jah is a DJ, and on many occasions it seemd like it here at SHYRICK DANCEHALL RADIO.  Some of the toughest and tightest squeezes this company faced over the years were miraculously solved on a wish and a prayer ... and on most cases "miraculous" is an understatement.

When Jah wants music to flow He ( to coin an old term) "works in mysterious ways."  The riddim MY GIRL out of Canadian born JAH SERVANT's lab is prime example and let me tell you why. 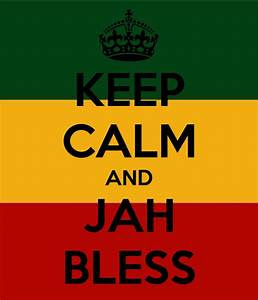 Any one who had networked  with me on Facebook knows Saturday mornings are dedicated to writing on cases for the the URGENT ACTION NETWORK  ( a branch of Amnesty International) which I have been doing for over a decade.  Recently I was having a conversation with a co-ordinator who passes the the cases to me and she was telling me about how a lot of the writiers recently were finding quite a few cases in the spam folder even though they were, like myself, receiving the emails from the organization for years. She was thinkng the Universe was conspiring against the organization ... but I was thinking,   "DAMN BABYLON !!!!!" 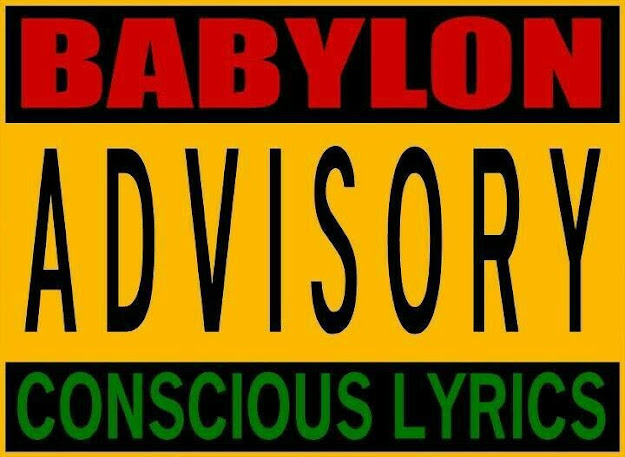 And I wondered if I too was unknowingly a victim of this cruel twist of fate so I checked my spam folder and guess what was sitting there  smiling at me ? You got it ! MY GIRL  from Jah Servant.  And what a treasure  to find indeed.  Thank you little voice in my head. 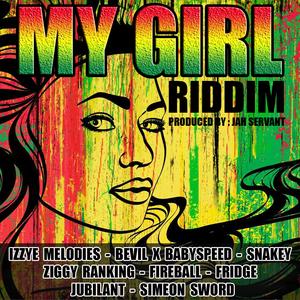 This riddimg is gorgeous! It is a solid old school style roots reggae  mix to the core put together with a lot of love and attention and some tuff artists riding it. 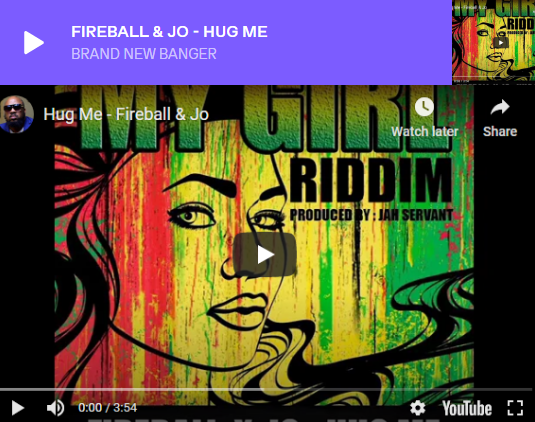 The riddim was something the DJ fell in love with when he heard it and the love didn't stop there... we put an MP3 recording of DJ FATTA ICON dropping the riddim for the first time on air into our NEWS REEL and also took the same MP3 to Northern Europe / Russia via VK.com  which was eaten up like candy.  No wonder this riddim is sweet like candy !

JAH SERVANT explains, "  In these troubled and uncertain times we want to bring a little balance and nice time vibes, so we are releasing the My Girl Riddim.  Some sweet lovers rock for you all.  The artists all hail from Trinidad and Tobago, the beautiful sister islands of the southern Caribbean.

"I believe music is a very powerful weapon and a tool for reaching others."

When ever I think of Jah  I am first reminded of  His Omnipotence , and how often enough His all encompassing presence comes across as a contradiction of terms. Huge enough to fill a universe yet small enough to fill a man's heart.  Often working with and through individuals the norm ( society)  would least suspect like little David as example.

JAH SERVANT comes across to me as such a cotradiction of terms as well. On the surface his presence in the Reggae scene seems to come from the most unlikely scenarios. Take for example the fact he was born in Cornerbrook Newfoundland.  To most people outside of Canada this may not necessarily mean anything, but as a fellow Canadian, Newfoundland is the LAST  place under the sun you would think to find a Rasta man hailing from.

Most of this countries Reggae artists, beatmakers and producers hover in  Ontario ( Toronto, ) and a few in Quebec.  Yet JAH SERVANT  has made EDMONTON Alberta   his home and where he hung up his shingle JAH SERVANT RECORDS which is now almost 16 years old.  Now Vancouver is more of a Rock/ POP/ Country scene.

At a closer look things seem to fall into clearer perspective though.  JAH SERVANT's father was a minister and a lot of Reggae artists will say they had their first taste for music and the love of music stem from being affiliated with a church choir.  Heck Reggae's Roots originate from Gospel and the Blues  so suddenly this doesn't seem such a far reach. 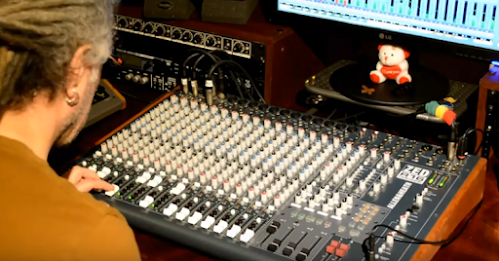 If I can be known as anything, I'd rather it be as a servant of the Most High because I'm nothing without Him anyway." In surrendering all of his musical talents to Him, he has found the result to be immeasurably rewarding. "I've given my talent to God and He's given it back to me to use for Him."JAH SERVANT 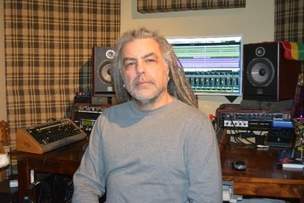 JAH SERVANT tells the JAMAICA OBSERVER, “I remember hearing songs on the radio when I was very young that had a reggae feel and I always liked those songs, not knowing that there was a whole genre of music like that at the time. I'm talking about Eric Clapton's cover of (Bob Marley's) I Shot The Sheriff, 10cc's Dreadlock Holiday, Led Zeppelin's D'yer Maker and later on Blondie's cover of (The Paragons) The Tide Is High. When I was probably 15 years old then I discovered reggae and really got into it,”

But how does a minister's son from Newfoundland who spent his youth in Vancouver BC and now living on the Praries manage to get so skilled in producing old school Roots Reggae and even more curious fill a riddim with artists from Trinidad and Tobango? Easy he marries a lady from Trinidad and Tobango and imerses himself in the culture while living there. 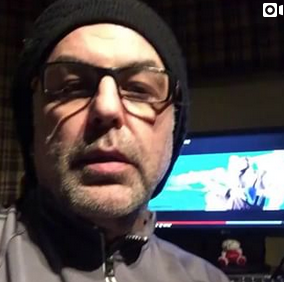 Having absorbed the musical influences of the likes of Sugar Minott, Gregory Isaacs, Yabby You, Peter Tosh, Prince Jammy, King Tubby, Solomon Jabby and others, Jah Servant's artistry is an amalgam of classic sound and fresh expression.

JAH SERVANT RECORDS  (which we have to mention first started out in Trinidad and Tobango but moved with it's originator to Vancouver BC) has a massive collection of good good vibes for the Reggae connoisseur to choose from .

“The focus is really to just release quality reggae music with positive artistes and messages. I don't really keep count of releases but probably close to 20 projects have been released at this point, plus other productions and mixing projects I've worked on, that people have released on their own,” he told the Jamaica Observer . 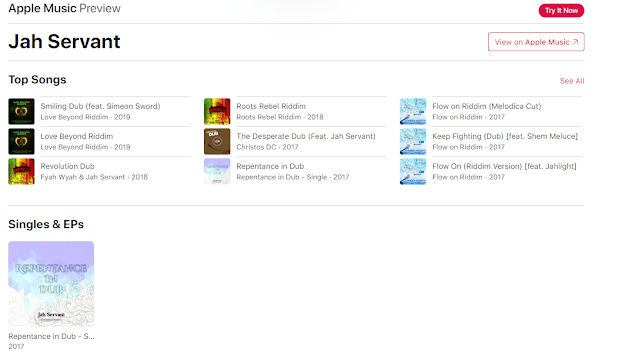 MY GIRL has not been released yet family, a lot of people like us here at SHYRICK DANCEHALL RADIO are waiting baited breath for the riddim to hit download, however do not dismay, follow this link and drop some more vicioust tracks from  JAH SERVANT into your music collections and keep an eye out on this download page for MY GIRL  which is promised to land soon :